He was one of the first proponents of voluntary simplicity. Born into privilege, he decluttered his life, rejecting luxury and ego, and embraced nature. “Possessions are a cause of disputes and strife,” he said.

His name was Francesco Bernardone. He lived in Italy from 1181 to 1226 and is better known as St. Francis of Assisi. The patron saint of animals, Francis is important not only to Christians but also to those of other faiths and to the “spiritual but not religious.”

It’s no accident that the pope took Francis’s name. “He brought to Christianity an entire new concept about poverty in the face of luxury, pride and vanity of the civil and ecclesial powers of his time,” he said before becoming pope. “He changed history.”

Pope Francis may be changing history, too.

A new book by an Amherst religious scholar examines popular depictions and interpretations of St. Francis in America. Patricia Appelbaum, a former newspaper colleague of mine, has written “St. Francis of America,” to be published in October by the University of North Carolina Press.

St. Francis is “an all-purpose rebel and crossover saint” who challenged the prevailing norms of consumerism, wrote Stephen Prothero in a review of Appelbaum’s book. She examines the manifestations of St. Francis in art, music, drama, film, hymns and prayers in different eras, including his influence on pacifism, hippiedom and environmentalism. This five-minute video is an interview with her. 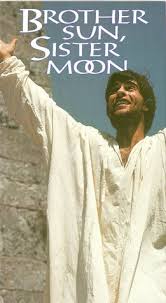 In 1972, Franco Zeffirelli made a film biography of St. Francis called “Brother Sun, Sister Moon.” Zeffirelli was best known for his wonderful 1968 version of “Romeo and Juliet,” but many people  found this movie insipid. The New York Times’ Vincent Canby called it “a big, absurd doodad, a movie that confuses simplicity with simple-mindedness and makes saintliness look like an extreme form of the Asian flu.”

But I kinda liked it. And Appelbaum told me that it’s coming more into favor.

For me, the biggest influence of St. Francis is his prayer, which begins, “Lord, make me an instrument of your peace.” I confess that I sometimes recite this prayer when trying to get back to sleep at 3 a.m., and when I’m in church and everyone else is reciting the Lord’s Prayer. I favor the version that adds two words to the last line: “…And it is in dying to self that we are born to eternal life.”

I can’t claim to have banished self-indulgence from my life, nor have I renounced all possessions and rejected all worldliness. I doubt that many of us who admire St. Francis have done so. But he provides us with an example of slowing down, focusing on the essential, and seeking more from life than wealth and ambition.

I emulate St. Francis because he saw simple living as necessary to being fully human, and the appropriate response to the message that we must always strive for more.

For new readers of this blog, here’s an index of more than 120 past posts on simple living, frugality, gardening, living without and climate change.

One thought on “My favorite saint”