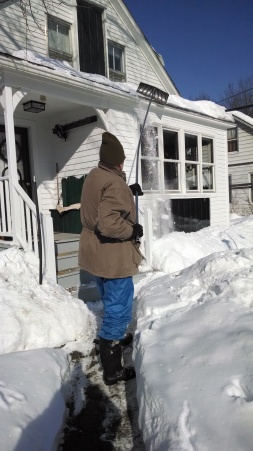 We’re awaiting the fourth or fifth snowstorm in the past month, and difficult outdoor tasks have been beckoning. I don’t mean simply shoveling several feet of snow, creating canyons on our pathways. No, these jobs are more physically taxing.

With several feet of snow piled up on our house, and the possibility of wetter weather Saturday night, we’ve been using a  rake with a very long handle to reduce the pressure on the roofs. The piles of snow have also built up on our firewood, and yesterday we ran out of easily accessible logs to put in our stove.

Our California relatives have probably never seen a roof rake. It comes in metal sections that attach to each other, creating an 18-foot-long flexible tool with a scraper at the end. For first-story roofs, you don’t need all the sections, and the work isn’t too strenuous. But when you extend the rake to its full length and go after the snow on a second-story roof, the strain on one’s arms is so great that Betsy and I have to switch off to get the job done.

Not that we actually get all the snow off. The last storm left an icy crust on much of the roof snow, requiring us to try to pierce the drifts before trying to rake them off. And there’s a thick coat of ice on the edges of the roof that would yield to only a hammer and chisel.

Actually, we should have been out there after every snow, clearing the roof in preparation for the next storm. But that’s asking a lot, and we didn’t get cracking until this week. Our efforts are probably not sufficient to prevent ice dams, which can cause roofs to leak, but maybe we’ve reduced the chances of a roof collapse.

With these below-zero mornings, our wood stove is like part of the family. But when I stacked the wood, I put a metal cover and old carpeting over it, and now the snow has built up on top, the carpeting is frozen, and I have to shovel to even get to the pile.

I have now used up the wood on one side of the pile, and the other side is blocked by the snow I pushed off the top. In the photo at right, I’m dislodging the logs stacked on the far side of the pile so I can load them into my canvas carrier and take them into the house. A woodshed would eliminate this problem, but I like figuring out winter challenges like this one.

I’m burning mostly locust wood these days, mixing it in with cottonwood, which burns hot and quick, almost like big pieces of kindling. I always keep in the back of my mind when the stove needs to be fed again, based on the amount and quality of the wood I’ve already put in, the temperature outside, how much air I’m giving the fire, and whether the sun will be out to warm the house. It’s a constant of the winter months, but it doesn’t feel like a burden because I enjoy it.

Only a month until spring!