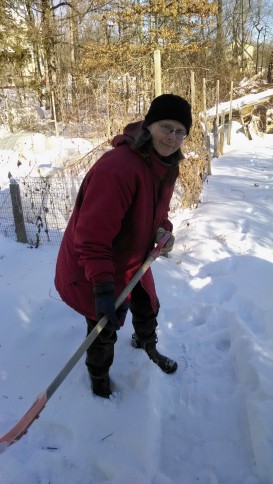 After six inches of snow fell on Amherst Tuesday, Betsy and I grabbed our shovels. We dug out the driveway and made paths to our wood piles, compost container, kindling shed and clothes-drying area.

The work was enjoyable because we did it together, got some exercise, and took in the bleak beauty of a New England winter. We talked to a neighbor who was doing the same task with her sons. We choose not to own a snow-blowing machine, just as we take a pass on lawnmowers, clothes dryers and second cars.

Snow shoveling can be a great workout for the legs, core, back, shoulders and arms — and doesn’t require driving to a gym or spending any money. Shoveling for 45 minutes burns about 300 calories, about the same as walking for an hour. But raising the heart rate can be dangerous for people who aren’t used to cardio workouts, so for them it’s a good idea to take breaks when shoveling.

I tend to plow through the snow, shovel flying (like in this video), while Betsy prefers a measured pace. She likes the rhythmic motions of snow shoveling, and seeing the result of her work. She prefers exercise that gets something useful done (unlike my running). 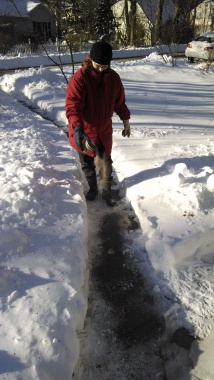 She sprinkles wood ashes on the paths to improve traction and absorb the heat of the sun (photo at left). This hastens melting and a return to bare pavement.

If Tuesday’s snow had been the predicted 18 to 24 inches, the job would have taken longer, but we would have enjoyed the challenge. Of course, many people are too old or frail to shovel snow — or they live in Worcester, which got 34 inches. We regret the passing of the days when teenagers earned money shoveling driveways, or did it out of sheer neighborliness.

The ready availability of snow blowers ended all that. Now, many people spend hundreds of dollars on a machine that requires gasoline, oil and professional servicing, while providing minimal exercise and drowning out any possible conversation with neighbors. Snow blowers save a little time, but they also create a pound of carbon dioxide per hour, the equivalent of driving 70 miles. Thousands of people have lost fingers while using snow blowers.

We prefer the old-fashioned way. Snow shoveling is not onerous because we’ve stopped thinking of it as a chore and now see it as an opportunity to get some exercise and to feel the cold on our faces as our bodies warms up. Afterwards, sipping a hot drink, we like to admire the results of our effort.

2 thoughts on “The joy of snow shoveling”