Have you ever had to euthanize a beloved family pet that had an incurable illness? That’s how I felt yesterday as I pulled up three tomato plants that had grown eight feet tall and were loaded with hundreds of unripe cherry tomatoes.

Betsy had spotted some leaves that had black splotches, and although I then sprayed them with a copper fungicide, I noticed the next day that some of the branches were turning black too. This disease goes by the name of Late Blight, but I think it should be called the Black Death. Once tomatoes have it, there’s nothing that you can do but uproot them, put the branches in an airtight plastic bag, and take them to the dump. Or you can dig a deep hole and bury them.

Late Blight comes wafting in on the wind, and insinuates itself into tomato plants during humid weather. It seems most likely to infect plants that are spaced too close together, restricting air circulation. In late May, I had lots of cherry tomato seedlings and got too greedy, placing three of them only two feet apart instead of three.

I had lovingly created cloth supports for the branches that veered outside the cages, and then created a maze of string at the six-to-seven-foot level so they could continue to grow and produce fruit. I had started spraying them with copper fungicide on July 14, earlier than last year. Now that garden spot is bare. 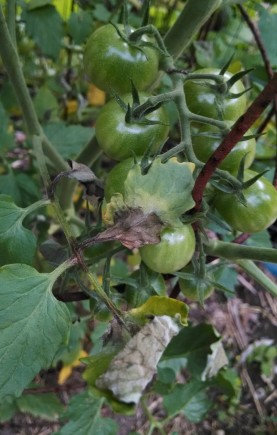 It’s tempting to cut off the black leaves and hope that the plant recovers, or at least lasts long enough for the fruit to ripen. But I was worried that my other tomato plants would be more likely to get the Late Blight if I did that. As it is, they’ll be lucky to survive. The Late Blight seems to be attacking tomatoes more frequently in Western Massachusetts (climate change?) and I think some other strategy is needed for next year.

How do you combat an enemy you can’t even see? Varieties that are resistant to Late Blight are now available, with names such as Mountain Magic, Plum Regal and Mountain Merit. We’ve talked about constructing a greenhouse to grow tomatoes in next year. For now, we’ll just increase the frequency of spraying our surviving tomato plants and plant some fall crops where the cherry tomatoes were.

“Killing your darlings” is a phrase created by eerie novelist Steven King in an essay on writing. He means that writers should be able to delete words or sentences or paragraphs that they love for their cuteness,  because they just don’t work for the reader. I’ve been there.

So when Betsy suggested that we had to pull up the tomato plants, I went and picked blueberries for a while and thought about it. Then we got two sets of clippers and cut off branch after branch and put them in a plastic garbage bag. It was painful but necessary.